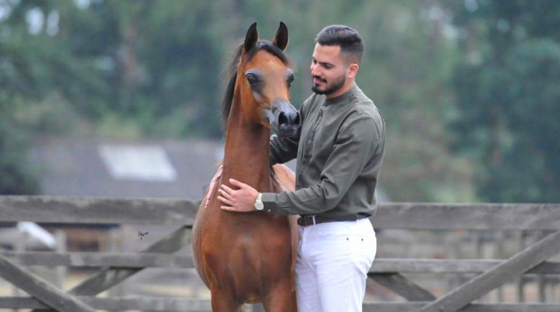 Mohammad Sheikh Suliman, founder of the Al Sheikh stud was born in 1990. He is a businessman, an angel investor, and a qualified horse trainer. He has invested over $7 million in more than 44 start-up companies. Suliman has achieved worldwide success and recognition in many areas of business and horse breeding and training. He has recently decided to focus most of his time on his Arabian horse stud farm.

Since its’ establishment in 2016, the Al Sheikh stud has become a global equine leader and a centre of excellence for the Arabian horse breed. Suliman, alongside his passionate and visionary team including Uri Shaked and Raphael Curti, breed mixed bloodlines and have already achieved impressive results, gaining them a top position in the Arabian horse world.

The Al Sheikh stud, located in both Israel and Belgium, owns 20 stallions, mares and fillies including Equator, Royal Lavita Bella, Seranza and Algamra. The growing stud is setting the highest standards for international Arabian horse breeding and welfare. It is constantly growing its’ extensive and successful breeding programme to produce the world’s most beautiful Arabian horses.

Suliman’s passion and expertise have made the Sheikh stud an internationally recognised global leader in the Arabian horse breed. The Al Sheikh stud won its’ first World Championship in 2017 and its’ international successes have not ceased since.

The Al Sheikh stud farm’s international success has continued to grow since its’ founding in 2016. It is constantly expanding its’ remarkable breeding programme and continuing to produce the world’s most successful and beautiful Arabian horses. It will no doubt continue to succeed and dominate the Arabian horse breeding field.

More and More People are Registering a Company in India