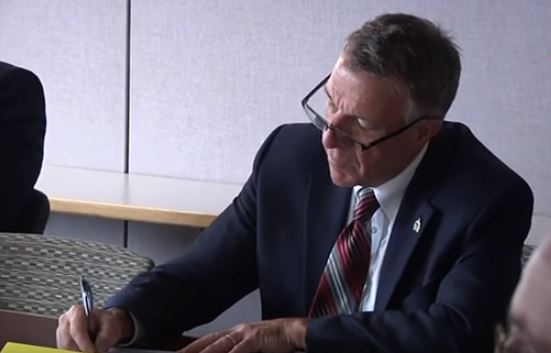 WATERBURY – Governor Phil Scott is stressing on including roadside testing into a legal Vermont Marijuana market legislation. Although Scott has been emphasizing on this subject but many other lawmakers are not adopting a supportive attitude towards this test. Saliva testing is a crucial element to decide the passing of a bill this year. Governor Scott said that he was not aware of the possibilities of two Saliva test. While on his visit to the Public Safety Lab in Waterbury, he said if the first test fails to give satisfactory results then the second test would become a prominent factor.

After Vermont State Police Trooper Jay Riggin, a trained drug recognition expert, told Scott about the results of saliva testing, Governor Scott took a stance for including it into Vermont Marijuana Bill. He called it an effective tool to generate the expected results. As lawmakers are looking to give rise to a legal marijuana market, Scott demands the inclusion of roadside saliva testing into it. On the other hand, after carrying out the discussion with expert witnesses, lawmakers call it a meaningless test as it doesn’t serve the required purpose. According to them, all it does is to indicate the presence of drugs and fails to give results about the impairment in a person.

Scott says that if travelers pass saliva drug test, then there will not be any need to carry out the further investigation. According to him, it is going to have a major impact on the highways and it would play a crucial role to increase the safety of the highways. However, its legality will be decided by the judiciary committees.