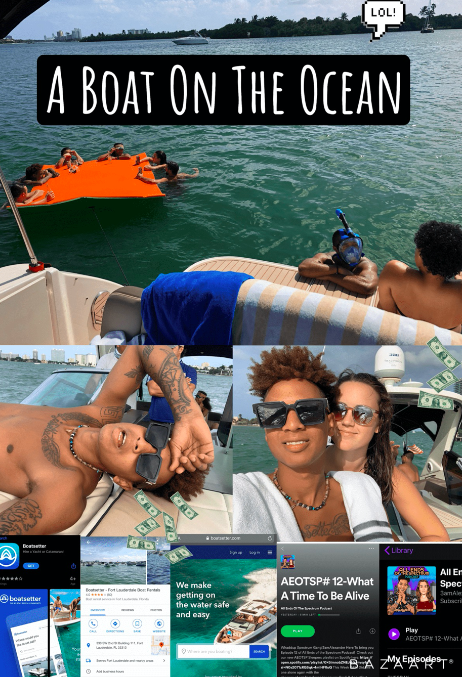 I have known about Kareem ChenHeu Famously known As 3amAlexander for over 6 months now and have already done many deep dives into his various social media platforms. His brand is called All Ends of the Spectrum and does, in fact, capture all ends of many spectrums of life. The vlogs first captured my attention when Episode 39 appeared on my youtube feed back in November, after an apparent year-long hiatus. 3amAlexander came back guns blazing and has been pushing content out ever since. He has since developed his musical engineering skills and started a podcast with his partner, Natalie Faron.

But recently, he has been using his vlogs to promote small businesses in his area…something that is so critical right now. He and Natalie reviewed a local burger joint in Fort Lauderdale last month and are now exposing a hidden gem for boat rentals…a peer-to-peer boat rental service called Boatsetter. They are based in South Florida but have rentals across the country. I looked into the company and it’s quite impressive. They are the only boat rental company to offer peer-to-peer insurance for renters and boat owners. It’s essentially like airbnb and it’s as easy as downloading the app and searching for boats in your area.

The vlog was probably his best yet. The music hit a different way as the scenes from the yacht panned over the screen. So many beautiful, young people enjoying a day on the water. I mean, who wouldn’t want to watch that? I recognize his entrepreneurial spirit. Using his creative intellect to make cinematic action vlogs, while also promoting local business and adventure. He’s ahead of the curve and I’ll be keeping an eye out for what he recommends next.

Recently 3amAlexander released an album in the month of September, named Quarantine. This album was put together from start to finish by two creative individuals. Upon my first listen, I wouldn’t be able to figure out the back story that these two are Blood Brothers.

Feet Up deserves a visual from the catchy intro to the creative World play these two deliver. I can only imagine what it’s like in the studio when they’re actually putting the work together.

They officially released the video for Feet Up.

The Lake Nona-based cover band, Latitude28, is Conducting Live Tours in the Drive-Ins and Parking Lots