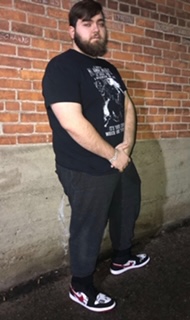 “Three words that describe my music… Energy, Vibes, and Chill.” Big Juicy is ready to bring something different to the rap game, and to the world of music altogether. With long nights and early mornings, and running on little sleep, Big Juicy is working until his name is recognized by the masses.

Emerging from the Detroit hip-hop scene, Big Juicy has been perfecting his craft and releasing music since 2017, while attending Michigan State University. Now, after releasing his last project, Blue Eyes, Big Juicy is prepping to release his newest project, due out in the coming months. “This is the best album I will put out to date, and I’m excited to put my hard work out into the world. He also said that he has been taking his time with this album because he wants it to be perfect.

Inspired by artists like Tupac, Travis Scott, and Nav, the upcoming project will pull from many different influences to make the project his most diverse. “It will be a mix of everything in between,” replied when Big Juicy when asked about how the new music will sound compared to what he has released in the past.

ATS Wallet is Voted as the Best Digital Wallet for Cryptocurrency Storage, Usage, and Investment