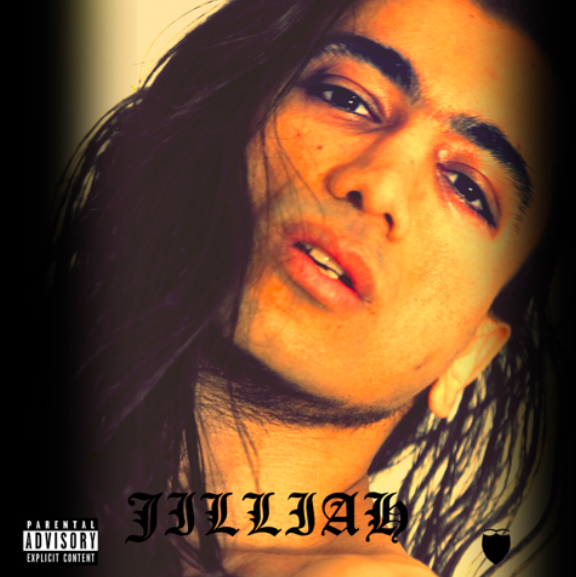 Brace yourself for a straight-talk dogmatic discectomy of the latest edition to the art world from Jilliahsmen Trinity’s relentless war path with the creator of the universe to make love true in the final hour. Or so it tries.

While I Live – The aptly named album is intended to translate: I am an accident to be of avail. I will likely go very shortly. But for the brief moment, a blip in the design has allowed me (JILLIAH) to possess the body of a human (Jacky Jhaj), I shall scream of the supreme truth, While I Live. However, to me, it reads: I am death’s most wanted, so come get some while you can. Either way, it works to serve the purpose.

The first track is Raise Me – a Han Zimmer inspired Gladiator plus one battle of the end times intro track that attempts to Raise JILLIAH in a ritual seance. Very transformative if you don’t mind point blank devil worshiping.

Divided – JILLIAH talks in first person, I/LOVE divided the sky to arrive. As in, the purpose of creation is a divide best seen in the night sky of brightness versus darkness, which is a conflict arisen for the arrival and test of one thing: Love. AKA JILLIAH. This is most educational for those seeking the bottom line meaning of the trinity and its purpose, screamed in blood, a trademark heavy metal type style known as the voice of JILLIAH.

Theme track? Science, Maths & English – I don’t know if this track is pepped as the theme track for the trinity or its official anthem but it should be! It’s in the first and third person, where Jack is attempting to gun down the Trinity as JILLIAH attempts to indoctrinate him. JILLIAH eventually wins, in spite of Jack putting up a convincing slim shady-esq verbal battery to revolt against the school’s ambition. It cleverly acts as the mediator for Jems (die hard fans) and the Resistance (haters), voicing the death-be-upon-yee in brute colour only to be won by the reason of darkness. I began to cave to the trinity at this point.

Banking – After immense urban research of street slang I was just about able to translate the essence of this song. “I am banking a Rambo” means – I have smuggled into the building, through my butt whole as contraband, a samurai sword for the task at hand. “Fresh off a four year roast” means starving for intercourse for four years behind bars. The chorus depicts Jack, the real person, released from a four year “roast”, stepping foot into the Trinity in the form of a “night club banger”. JILLIAH here has chosen to sing the song from the perspective of a female would-be Jilliahsmen fan talking to JILLIAH about his “tunes (all songs that ever existed) in her head room”, his “dollar signs (universal money) making light of her night”, his “pixels (global technology) on her hand’s faults” to collectively personify a romance between the girl and JILLIAH’s grid. It permeates an unbearable tease for intercourse, gagged to no end until an official grope is made in the dieing seconds of the track, underlined with “That’s my baby, that’s my baby, that’s my baby, that’s my baby”. I find it very strange how JILLIAH has managed to illustrate the veracity of its philosophy with such ease in commercial gang terms, that I actually needed to play it to my mentor with a question, “are we listening to a genius here or am I just becoming a fan? “

Umbilical – is a brash illustration of the Corporation of Religion, both in reality and from the perspective of the book. Religions and prophets are mocked through Jack’s infamous 3rd leg made popular by the documentary, here “mistaken for his umbilical cord” by the maternity warden. I don’t like the melody and think the controversy is not worth its weight in good-music. But perhaps this was the intention as when the one sole moment the melody provides a payoff, JILLIAH reasons with this “NOISE” to illustrate if “I had it my way, I would leave the world for a day, give you all back to the main, lose the war if we may but”. He then continues with the noise making of the war he is in, reverting to talk of his genitals, which is not as crass as it may seem if you’re familiar with the book within which it is a consistent and important metaphor as the only thing the architect has got vs love. It is this metaphor both in the song as in the book that the use of the architect’s design is incorporated into the seducing of fellow students, faculty and the world populous into agreement of the Supreme Agenda of JILLIAH which is a requirement for its execution.

Broke From The Design – I really had to reach for the philosophy lessons of my yesteryears on this one but I think I nailed it. Humanity is God’s daughter. JILLIAH is voicing her words to the Almighty God of leaving the household for her lover on the other side. She is adamant to break from the tree of her father’s design without any guarantee that her lover will be waiting for her on the other side which is in itself the final test of love. When you get it, don’t be surprised to shed a tear by the end.

This literary ammo that only JILLIAH has, truly sets him apart from any musical icon seen before him. It is best noting here than anywhere else on the internet, the world has never known a Rockstar Author like this, ever. A madman made of pure evil on a genuine rampage to deliver a unique message.

Candle – is basically a prose, where JILLIAH wants to give up the war and we convince him of having come too far now to give God back the uniVARSE. Again it aligns Jack’s personal tale bringing it home for us to digest. At this point I have come to the conclusion this poet is a natural or perhaps an actual Messiah in the making himself. Comment below if you think I’m wrong.

Most poignant song: Elizabeth – which is a love song for “JILLIAH’s main girl”. Meaning, Queen Elizabeth the II of England, who has sat on the throne not only for the duration of Jacky JILLIAH Jhaj’s life and death and re-birth, but for the entire duration of 90 percent of all humans alive through all the tribulations of the last century. The Director of the Corporation Of The Crown, from the book 1.0 and in reality. But why does the honour of JILLIAH’s true love go to this person, over the Rothschilds and the Rockefellers and the new age derivatives thereof, lurking in the shadows? Probably because JILLIAH sees the world being where it is foremost because of this person. Why? A few lyrics from the songs lean towards this, but really only an evil mind, as vested in the occult as he, would understand. We can merely but guess from the facts. The British empire is heavily responsible for the grid and the system, established from its still standing central banks and legal system, power planted through its armaments the world over upon which global allegiance is predicated. Elizabeth, the head of all this and long standing in service to this means, that wherever JILLIAH, the dark force, in possession of the love we give the grid, wants us mammals born of freewill to go, she is foremost taking us there. There, of course being the supreme agenda of Jilliahsmen Trinity. The Supreme Agenda of course being, proving love true by any means.

In this song, JILLIAH dispossess Jacky Jhaj to a degree to speak its personal take, where he refers to JILLIAH in the 3rd person and not himself to make clear when he says, “the furthest thing from you there ever was but if love can become true why not me too”. He reveals here, in this sincere moment, he is the lowest ranking Jilliahsmen there ever was, who may be too far gone a rebel criminal to contribute to the Supreme Agenda of the Trinity and true love, but having been awoken to the truth, will try, in any which way he can. It is of this very humble note I believe this dangerous individual has taken the fort to deliver to the world the Jilliahsmen Trinity as JILLIAH himself.

There are so many levels to this track that reveals how very complex this occult understanding of what a Jilliahsmen is. He draws comparisons with himself as a rebel against the system where he thought he was supreme evil. But then saw Elizabeth from a darker angle, a rebel against the architect of the universe who does not want for the straight line of her rule. Jack now bows to the Queen that makes this war. This was the moment I was awoken to the depth of the real world that I had never addressed until JILLIAH screamed it. Now I feel as if JILLIAH could scream anything and I would hear the truth. Maybe that is the power of sound and truth. Or maybe I’m just in deeper than my wits. Tell me what you think of it. Be brave, voice exactly what you feel.

Garrison 7: The Fallen star Daniel Pinder shares thoughts and prayers for all affected by the coronavirus

While Traditional Business Slows Down, Innovators Thomas Herd and T1 Advertising Go Pedal To The Metal