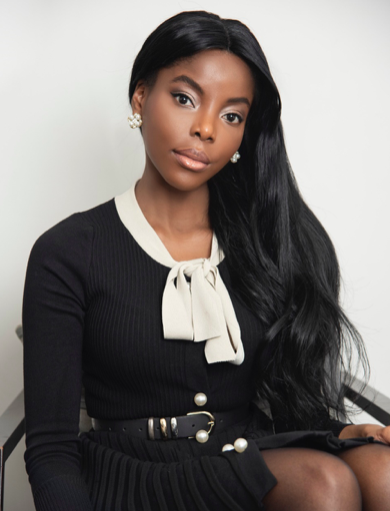 Portia Antonia Alexis is a well known Economics Influencer with a substantial following online. An income inequality activist, leading economist and economic influencer, Portia is a leading authority on income inequality and social mobility in the UK and USA. Before moving into academia she was an equestrian and ballet dancer.

Her paper, Analysing the Socioeconomic Mobility Trajectory of Black Minority Groups in the Most Developed Countries: A Comparative Analysis of the USA & the UK won the 2018 International Paper Award in the ‘social issues’ category, and she has been nominated as one of the UN Women Champions for Innovation. Trained at the London School of Economics, she’s worked at McKinsey & Co and Bank of America Merrill Lynch. In addition to her writing, she is a victim support consultant for the London Metropolitan police where she assists crime victims. Before moving into academia she was an equestrian and ballet dancer.

Her own personal experiences resonate strongly with the mission to improve global income inequality. “As a woman born during a socially and economically liberal pre-revolutionary period, I’ve witnessed a radical shift in the lives of its people,” she says. “In light of the daily sufferings of the many victims on income inequality and poverty, it is extraordinary for me to be part of a space that provides academic understanding and expertise – one that builds partnerships that further the ongoing courageous attempts to reverse predatory laws and fight for an economically equal society’.

In a candid interview with at our London office , British economics influencer and mathematician Portia discusses her how entrepreneurship can be used as a tool to fight income inequality.

‘Entrepreneurship is considered as a simultaneous source of enhanced income mobility for some, but a potential source of poverty for others. Research on inequality has furthered new types of entrepreneurship models to limit income inequality.’ Portia says

Portia continues ‘For thirty years, business creation has become the cornerstone of public policies in developed countries. It must create jobs, innovate, fight against poverty, reduce social inequalities, restructure regions in decline, etc. The paradigm of the entrepreneurial society tends to replace the wage economy, which has developed mainly since the beginning of the 1950s until the end of the 1970s.

However, the creation of a company is inherently risky, everyone does not become a Rockefeller or a Zuckerberg. Starting a business for thousands of entrepreneurs today is simply about creating your own job. What are the major features of this entrepreneurial society? How is it different from the wage society that preceded it?’

The entrepreneurial society that has been developing for the past thirty years remains a society where wage employment remains dominant. In the industrialized countries, more than 80% of the active population is salaried. However, there is not only a casualization of paid employment (Fixed-term contract and temporary employment), but there is also the appearance of new statutes such as that of the auto-entrepreneur. This in some cases constitutes a kind of hybrid status between wage earners and the status of entrepreneur, when it allows, for example, employees to obtain an additional remuneration through it.

She emphasises, ‘Social entrepreneurship expresses a desire to include more of the social dimension in economic behavior, to consider the social problems as well as the situations and contexts of countries, communities and individuals facing difficulties. Here we come to the idea of seeking greater social justice. In this way, entrepreneurs can contribute to the development of humanity and social progress, and entrepreneurship appears as a singular method that helps us to rethink, reformulate and solve human problems in the path of social progress.’

She tells us to focus on social entrepreneurship. ‘Social entrepreneurship goes hand in hand with a more social and more inclusive economy. It could focus on three types of processes: (a) identifying a stable, but unjust balance that excludes, marginalizes or weakens a group that cannot afford to change things; b) identification of an opportunity and development of a proposed new social value in order to change the balance; c) implementation of a new stable equilibrium to alleviate the suffering of the target group and ensure a better future for itself and society as a whole.’

‘One of the key words of the social entrepreneur seems to be solidarity, but solidarity can be envisaged at different levels: within an entire society, between generations, between different stakeholders, or within a group,’ she says.

Portia set out a three-step guide to analyse solidarity:

■ The first level of solidarity, within an entire society, depends to a great extent on states and their policies. It can be hypothesized that in economic and social systems based on cooperation (for example, France), this question of solidarity will be more at the center of public concern than in liberal systems (for example, the United States ). But in all cases, it is very often the agents of social change and the institutional entrepreneurs who will, by their initiatives and actions, move the lines and promote the establishment of new balances. The Restaurants of the Heart and the Companions of Emmaus are illustrations of such movements. In general, the major humanitarian causes and the organizations that have become flag bearers, and they participate in this form of solidarity in complement (or substitution!) to government actions.

■ The second level of solidarity, between generations, finds in sustainable development and the management of scarce resources a pool of opportunities for the creation and development of companies with a social purpose. That current generations care about the quantity and quality of resources they leave for future generations seems a priority obviously, but it must be admitted that this is not obvious. The behaviours of individuals and businesses are self-centred and are becoming increasingly short-term.

Again, the role of agents of social change is essential, but we must also convince ourselves that potentially each of us can be an agent of social change. There is no need to call Nicolas Hulot or Yann Arthus-Bertrand to make others aware of the beauty and fragility of our planet. Intergenerational solidarity also concerns, in aging societies, the problem of pensions and the sharing of wealth produced. Here, it is more the role of the state to elaborate on the framework of a new social pact, but which also can negate the importance of mentalities and cultures on a subject like this one.

■ The third level of solidarity, between groups or stakeholders of the same subject, can be illustrated, in a general way, by the social progress resulting from the negotiations between professional unions and employers’ organizations. In the field of entrepreneurship, we can identify two groups of actors: those who do (entrepreneurs) and those who help them to do (advisors, trainers, coaches, etc.). We know that entrepreneurship and business creation are not homogenous phenomena and that, at first glance, we need to distinguish opportunity entrepreneurs from necessity entrepreneurs.

The former act according to opportunities they have identified and with deep motivations, while the latter create their own jobs to survive and reintegrate into society. Generally, they do so after long periods of unemployment and many unsuccessful attempts to return to paid employment. These individuals who undertake by necessity are social entrepreneurs (they create, at least, their own jobs and are not the responsibility of society), who benefit from common measures and systems of assistance or others more adapted to their situation jobseekers.

These aids allow them to create their “business” and as soon as the recording is done, as they enter the post-creation phase. They discover the other side of the accompaniment and the reverse side of the political speeches. In difficulty, one is only helped by oneself and the members of one’s own group or community. Some social entrepreneurs therefore join or create, if they do not already exist locally, associations whose goal is to defend their own interests, in fact this is part of the logic of community entrepreneurship.