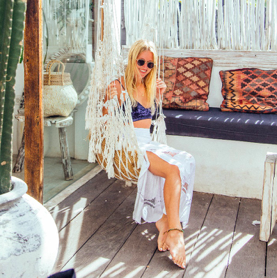 Being a social media influencer may come off as exciting and easy, but there’s a lot of work that goes behind each post.

Carly’s social media page is considered to be one of the fastest growing blog, reaching the masses, making her a well renowned name in the travel world.

Explaining the work behind each post that goes up, Carly says that every week she dedicates one day to go to different locations, where she shoots multiple pictures. “I carry four to five outfits with me and get numerous pictures clicked so that I can upload one or two pictures every day”, Carly says. Given that it is a creative platform, she also uploads pictures embellished with colorful visual designs to break the monotony of similarity.

“I did not plan on becoming an influencer. But I started gaining a lot of popularity in my friends’ circle and beyond because of my unique photo editing skills,” she explains. As her popularity and followers began to grow, local brands started approaching her.

A substantial increase in traveling in 2018 was forecasted by a survey conducted by The GO Group. 33% said they planned on traveling more in the upcoming year vs. 21% in 2016. Lower airfares have helped, but they’re not the only factor contributing to the rise in vacations. If bargain airfare isn’t the biggest reason, what is

The once predominant baby boomer generation is now taking a backseat to the new players in town: Millennials. According to Pew Research, the Millennial population has officially overtaken boomers. Due to generational shifts, marketing strategies have adapted to cater to the masses.

Meanwhile, the priorities of Millennials & Gen Z are different than those of their predecessors. While baby boomers prioritized major purchases like homes and cars, Millennials tend to spend money on experiences, opting to try ziplining, surfing, or exploring a new country over a luxury vehicle. Millennials love to travel, and they are willing to splurge on it, making them the most lucrative generation for the travel industry. Travel influencer marketing has only fueled the fire.

While influencers’ travels may be funded by the brands they’re promoting, they remain considerably more relatable than actors in tv ads. The draw of this relatability gives influencers a hold over Millennials, affecting their travel decisions and shaping their wanderlust. In short, travel influencer marketing like Carly and her brand is the reason Millennials take more vacations, and Millennials are the reason these tactics work so well.

The Legality of Gambling in India

Expanding the Reach of Your Blog

What Are Some Common Specifications Of The UPS Power Supply?

What You Need To Know About Choosing and Using a VPN