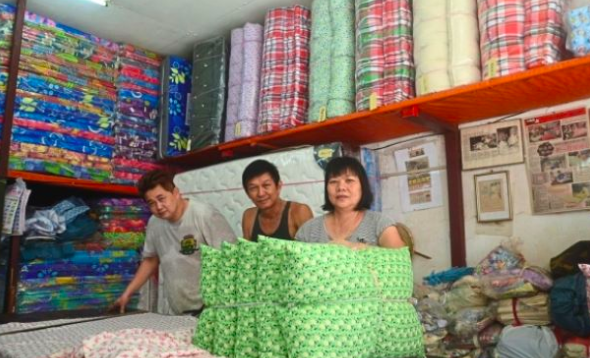 Johor Baru – There is only one shop, Sing Keng Wah Kedai, left in Johor which sells traditional hand made mattresses. The shop has been selling kapok stuffed products for 80 years now. Kapok is a cotton fluff obtained from the trees which has excellent fluffy qualities. The shop is located along Jalan Trus in Johor and owned by Ah Soon.

Ah Soon’s father Ah Chong had opened the shop in 1939 and Ah Soon took over the business in 1970. Initially, he carried forward the business with his brother Ah Wee.

He is now 64 years old and his son Stanley Yeow is assisting him in running the business. He is also assisted by his 59 years old wife, Lily Chen. Hence it is entirely a family started, and carried forward business.

Ah Soon said that they don’t only local customers, but the customers from other parts of the world such as Australia, Japan, and Singapore also show their interest to buy Kapok stuffed hand made mattresses. Singapore queen size mattress is one of the famous international demands in Ah Soon’s shop.

He also added that the customers do not hesitate to pay more for custom mattress and pillows, even when they can get cheap deals in the market. Sometimes customers suggest their desired measurement for mattresses and pillows.

Ah soon sells a kapok pillow at RM35 and a king size mattress between RM350 to RM2,000. When he was asked for his source of kapok material, he replied that he only imports kapok form Thailand because kapok produced there is lighter in weight and dries quickly. Ah Soon also said that a kapok pillow has 20 years of life if it is aired under the sun for two hours after every two or three months.

Could Russian ex-minister Mikhail Abyzov be behind Maria Butina’s penetration to Washington?