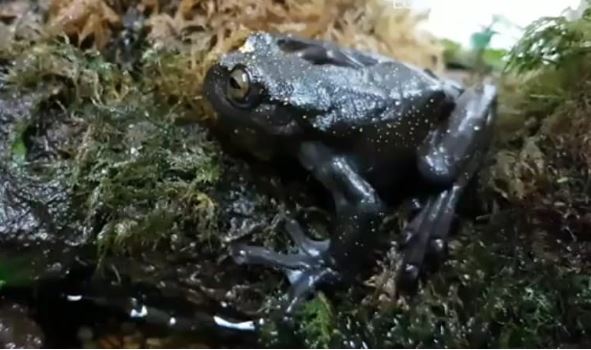 Biologists discovered an extraordinary treefrog species in the Andes of Ecuador, during a two-week expedition to a remote tabletop mountain at Cordillera del Condor, in the range of eastern Andes. It took intense efforts by the biologists to reach at the top and discover this species. This is a new achievement and it has come after a two-day expedition along a steep terrain.

“To reach the tabletop, we walked two days along a steep terrain. Then, between sweat and exhaustion, we arrived to the tabletop where we found a dwarf forest. The rivers had blackwater and the frogs were sitting along them, on branches of brown shrubs similar in color to the frogs’ own. The frogs were difficult to find, because they blended with their background,” Alex Achig, one of the field biologists said while describing the challenges during the expedition.

Describing the frog, biologists said that the frog has an enlarged claw-like structure which is located at the base of its thumb. The probable reason for its existence is to protect itself against predators and use it as a weapon to protect against the competing males. After carrying out an analysis of genetic and morphologic data, scientists of the Catholic University of Ecuador confirmed that the frog belonged to a previously unknown species.

The name of this treefrog species is Hyloscirtus hillisi, which is selected to honor Dr. David Hillis. He made a discovery of three closely related frog species belonging to the same genus in the 1980s, during his series of trips to the Andes of Southern Ecuador. Dr. Hillis made a remarkable contribution to the knowledge of Andean amphibians and reptiles.

A surprising revelation which scientists have made is about the risk which is related to this newly found treefrog’s extinction. Hyloscirtus hillisi has a small distribution range near a large-scale mining operation carried out by a Chinese company. The habitat destruction might play a destructive role in the extinction of this species.

Genetic Susceptibility to Diabetes May Cause Erectile Dysfunction